One of the key use cases of EdgeVPN.io is to enable deployment and management of Docker containers on resources both at the edge and cloud, and creating a virtual network spanning all the managed resources. To this end, Evio offers a custom CNI (Container Network Interface) plug-in supports seamless integration with Kubernetes and avoids the extra encapsulation overhead introduced by Flannel.

Inter-node communication between pods on Kubernetes is enabled by networking infrastructure set up by CNI plugins. This page overviews the architecture and setup of the Evio CNI plugin enabling Kubernetes hosts and pods to be connected by a virtual network - regardless of whether they reside in distributed edge resources with private addresses and behind NATs, where inter-node pod traffic is carried across authenticated, encrypted virtual network tunnels between nodes part of the Kubernetes cluster.

The general approach to integrate Evio with Kubernetes relies on two overlays, which can be deployed as a single instance of the Evio service on each k8s cluster node.

The following figure illustrates; in the figure, two hosts on separate edge networks (with different NATs) are connected by an Evio tunnel. In edge host 1, the host is assigned an Evio virtual address 10.10.0.1, while host 2 is assigned 10.10.0.2. The two hosts use this host overlay interface to communicate (e.g. if host 1 is the kubeadm node, host 2 uses this interface to join the cluster). Pods deployed on hosts 1, 2 are assigned addresses on the pod overlay (e.g. in the figure below, pod 10.244.1.2 at the top left in host 1, pod 10.244.2.3 top right in host 2). Both overlays are tunneled through Evio. Note that the host IP addresses are not relevant - they could be private addresses on different namespaces; Evio’s NAT traversal capabilities allow establishing tunnels that bootstrap the host/pod overlays with their own virtual address namespaces.

The figure below zooms in to a host, highlighting how the Evio CNI plug-in operates. The architecture is based on the Bridge CNI plugin, which is extended by incorporating support for OVS (Open vSwitch) SDN bridges. It has two major modules/executables: the CNI plugin, and the CNI configuration generator (CNI-CONFIG-GEN in the figure). Both of these executables are deployed as a daemon set on the Kubernetes cluster, where they run on every participating node. 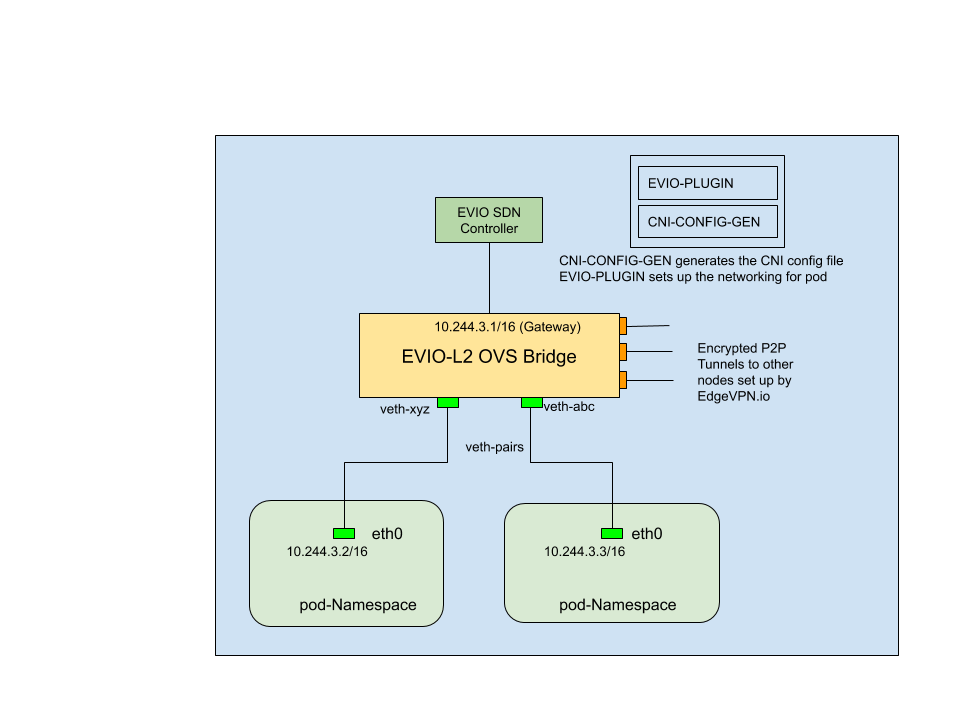 The key functionality implemented by the Evio plugin consists of:

CNI config gen runs as an Init Container and generates a configuration file which specifies the CNI plugin to be picked up by Kubelet. The Evio CNI plugin carries out the actual task of setting up the network.

Two key aspects of networking need to be configured by the user to drive this module:

CNI config gen keeps track of the address range of pods allocated to each node by leveraging Kubernete’s Etcd database. When a new node joins the cluster, it generates a configuration file with a non-conflicting address range for pods on this node, and saves it in the default “/etc/cni/net.d” directory.